Indian equities have posted strong (year-to-date) results in 20211. The market’s performance comes on the back of cyclical economic recovery after a strong second wave of COVID-19 earlier in the year, as well as attractive secular economic themes. In this investment note, Rana Gupta, Senior Portfolio Manager and Indian Equities Specialist, explains how government reforms on formalisation and re-investment laid the foundation for two powerful drivers, the digital economy and manufacturing, which create synergies to propel India’s long-term economic growth.

In previous pieces, we have highlighted that the Indian economy began its structural and transformative journey in 2014. Over the past three years, this process has been strengthened with a cohesive policy framework. This started with formalisation reforms and a nationwide 4G network rollout, creating a solid foundation for growth through digitalisation.

The economic disruption caused by the COVID-19 pandemic has only accelerated this transformation. On the one hand, the government has consistently focused on long-term policies under formalization and the 3Rs framework. While on the other, Indian businesses have embraced digitalisation to counter any COVID-driven disruption. Due to the disruption of supply chains and increasing costs, growing domestic businesses have started moving to manufacturing instead of imports.

We have already articulated that the structural changes in the Indian economy have created two powerful themes that should serve as the primary drivers of India’s medium-term growth trajectory: India’s formalisation through a digital economy and reinvestment in manufacturing (see Chart 1).

For illustrative purpose only.

India has experienced strong growth in its digital economy over the past five years. It is now at an inflection point with digital businesses attracting global capital and new listings in the public markets.

The foundation of this transformation was laid in 2014 when the government started on its formalisation reform journey with the digitization of identity records and linking it with bank accounts and mobile devices (the JAM trinity initiative)3 . This has been further complemented by indirect tax reform that has plugged tax leakages.

We have seen an exponential growth in smartphone users, estimated to reach one billion by 20254, and internet subscribers over the next five years. As users have adopted digital, so have India’s businesses, driving digital payment and e-commerce growth. Even with the recent expansion, India’s e-commerce penetration rate (as a percentage of total retail sales) still ranks low globally, leading to strong future potential growth prospects (see Chart 2 & 3).

As digitalisation and formalisation amplify each other, we have seen new digital platforms emerge that connects users and businesses using the power of smartphones and the mobile internet. Large platforms have emerged in areas where markets are traditionally fragmented, like personal services, transportation, food delivery, hospitality and pharmacies.

As these platforms help businesses grow, smaller and informal merchants are now joining the formal economy. This, in turn, has opened new avenues for fintech companies to leverage the transaction data for better credit origination, underwriting and collection. It also provides credit to new credit customers, reinforcing and perpetuating the virtuous cycle of digitalisation and formalisation. We see this journey to a more formal and digital economy as transformational.

These developments should open a new avenue for capital allocation and may make India the next big destination for internet businesses after the US and China. Despite the strong growth seen in the past five years, overall e-commerce penetration remains low, and India’s user base is second only to China’s.

We believe India is at a crucial juncture where it can improve its share of manufacturing to GDP with a comprehensive policy push that we call the reinvest policy under our 3Rs framework. This comes from import substitution opportunities and the export share of products where India already has a sizeable presence - mainly as the world looks for an alternative sourcing base outside China.

To realise this opportunity, the policy framework has three pillars:

1) A lower corporate tax rate of 15% on new manufacturing investment, one of the most competitive in Asia;
2) A set of production-linked incentives (PLIs) designed to catalyse new investment and encourage production in India;
3) Import disincentives in sectors where there is a significant import component;

This policy push has resulted in investments into import substitution in products where domestic consumption has reached critical mass. In turn, this should make it more viable for global brands to use India as a manufacturing base and gain a share in global exports despite the current environment of slowing globalisation. Indeed, we already see this playing out with solid growth in domestic electronics manufacturing that should lead to high export growth in 2022 (see Chart 4).

The PLI schemes are, by far, the government’s most focused effort to increase manufacturing’s share of GDP. Currently, the PLI programme envisages total incentives of around US$26 billion across 13 sectors over the next five years8. Mobile phones were one of the first areas to receive a major policy push from PLIs, as they have a high import dependency and a large market size. After seeing success with rising domestic production, we expect other PLI schemes to be announced in the following areas:

Ultimately, we believe that PLI schemes should attract significant investment and add incremental revenue to the tune of INR$35-40 trillion over the next 5 years9, thereby improving manufacturing’s share of GDP. As this happens, this should create another virtuous cycle – added manufacturing value may raise domestic savings, improve government finances, and give the government room to support the manufacturing sector with better infrastructure and incentives.

These two themes should feed off each other to create another virtuous cycle, creating more jobs, improving domestic savings, and enabling reinvestment in better infrastructure. Indeed, we already see the synergy of these themes driving improvement in India’s macro situation with an improving better fiscal backdrop, as a more formal digital economy leads to better tax compliance (see Chart 5).

A lower current-account deficit is the result of more high-value domestic manufacturing, while policy incentives have reduced imports and increased exports. Higher share of digital and manufacturing in the economy has also resulted in improved productivity. 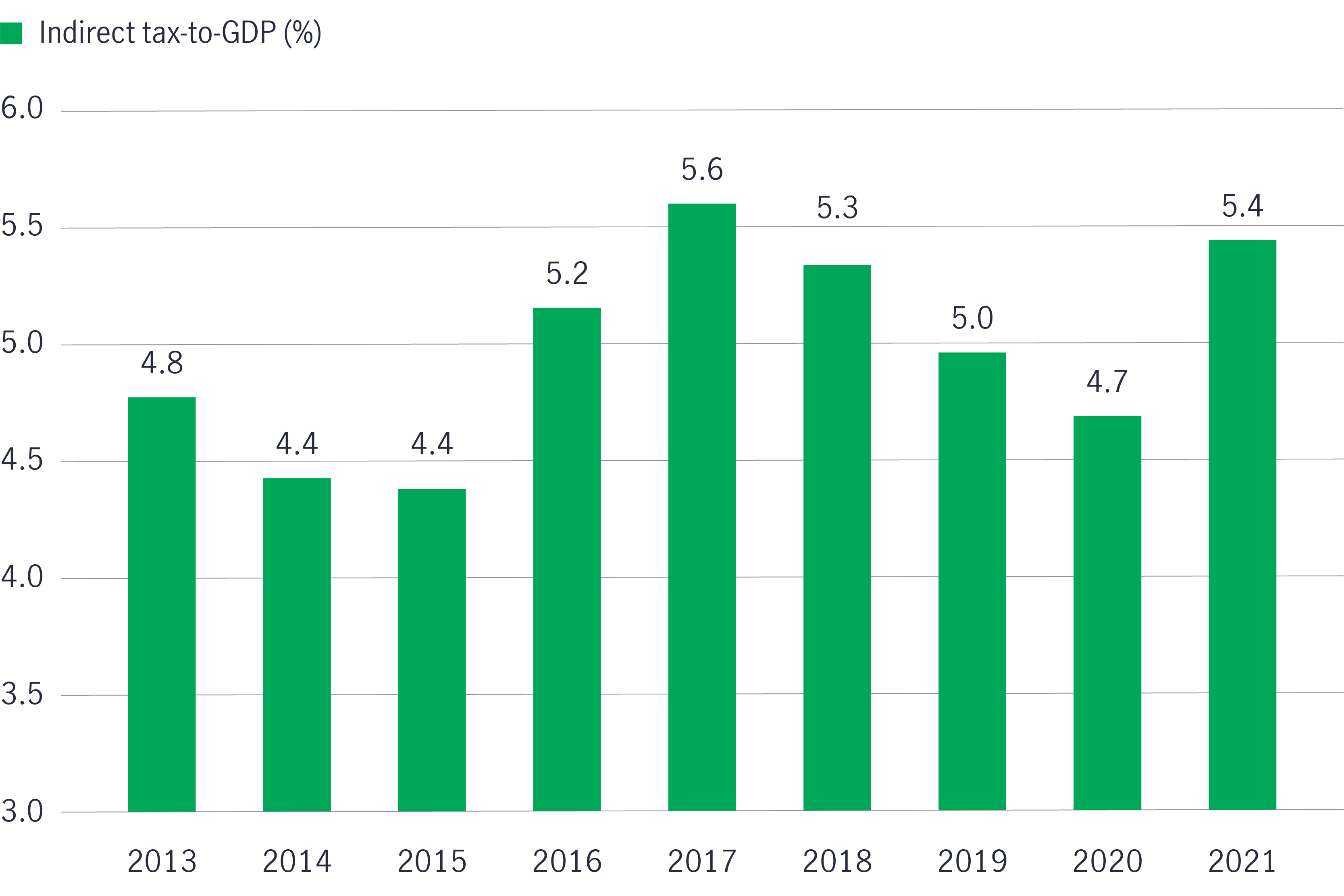 This also makes India’s external accounts more resilient. India is receiving foreign direct investment and foreign portfolio investment inflows that exceed the current account deficit of -1%11. This leads to a healthy balance of payment surpluses and makes the country more resilient to external shocks, like a sharp increase in oil prices. Indeed, India’s foreign-exchange reserves are at an all-time high of almost US$640 billion12.

India also has limited its international borrowing, which gives us comfort on external accounts and currency even if developed-market central banks start to normalise monetary policy. Indian bonds may be included in the emerging market indices later this year. If this happens, there could be inflows of as much as US$40 billion over the next 12 months13. Given the stable rupee outlook and current 10-year bond yield of 6%, we believe that there should be limited upward pressure on yields.

Cyclically, India looks well positioned for a strong recovery in Q4 (calendar year 2021), given high-frequency indicators like goods and services tax collection are showing strong year-on-year growth. We expect that the Reserve Bank of India should keep monetary policy accommodative to support the recovery.

India also remains one of the few countries that has enough vaccine capacity to inoculate its entire population. This should further support the country’s economic recovery. Our belief is that most of the adult population has already received at least one shot, and by early 2022 we expect nearly all adult Indians to be fully vaccinated, after which India is likely to become a net exporter of vaccines (see Chart 6).

Finally, we also see opportunities in banking and financial services as domestic savings grow and new opportunities of credit deployment opens. We expect Indian households to allocate more of their savings to financial instruments like insurance and mutual funds as structural economic growth improves and inflation moderates. Indeed, flow of domestic savings to equity markets could be a big source of strength moving forward.

As the government’s fiscal balance improves due to a more formal economy and divestment, we expect higher allocation to infrastructure and support for manufacturing through incentives. After significant restructuring of assets over the last five years, Indian corporate balance sheets are in good shape and we expect them to invest more. This bodes well for opportunities in the Industrial sector.

We expect powerful thematic drivers and their interplay to raise India’s economic growth potential and make it structurally more resilient. As reforms made through formalisation and the promotion of manufacturing, and the subsequent macro impact, become more visible, we believe these factors should drive economic growth and earnings with room for the cost of capital to fall.
Over the next 12 months, we expect significant opportunities for public-market investors to participate in the digitalisation theme with more equity listings from consumer technology, health technology, and fintech businesses. This represents a tremendous opportunity and a long growth runway for internet companies. Over the next year, we expect to see multiple large platforms go public.

3 The JAM trinity leveraged telecom infrastructure to use cash and paper less, bringing unbanked individuals into the formal economy. The proliferation of private investment in India’s 4G network since 2016 amplified this impact, which has driven 4G availability nationwide to near 99%. Source: https://www.gsma.com/membership/resources/upgrades-in-mobile-speeds-in-india-come-with-expanded-4g-availability/